[ATLANTA, GEORGIA, January 29] Atlanta natives and local artists, Dizzy and Quake, were chosen to develop and produce artwork for an upcoming Slim & Husky’s Pizza Beeria location in West Midtown. Starting with perimeter visuals within the men’s and women’s restrooms, Dizzy and Quake aim to give the interior of Slim & Husky’s an authentic, Southern vibe.

“My vision for it is Atlanta,” Dizzy said. “We have to make it nostalgic.” 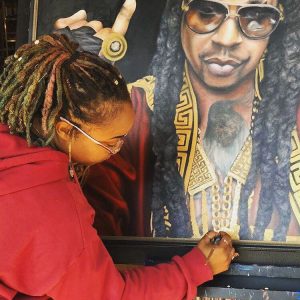 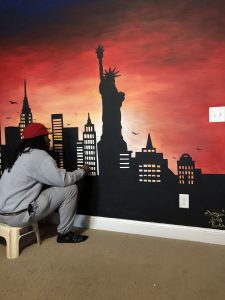 The plan is to position legendary artists harking from the Atlanta area in an empowering manner through the pair’s unique approaches.

“I like to challenge the perspective that the daily things we go through are bad, because they really aren’t as bad as we think they are,” Dizzy explained.

As a former psychology major, Dizzy tackles cultural approaches to death, while Quake focuses on inner representations of external struggles, especially related to his experiences as a black man in modern society.

“The guys and I felt that Dizzy and Quake were the right artists to pay homage to Atlanta and bring both the beauty and the pain to life,” Gray, Slim & Husky’s Chief Marketing Officer, said.

Other Atlanta artists will be announced in the coming weeks to complete works at the two Slim & Husky’s locations opening in 2019.

Slim & Husky’s is a fast casual and gourmet pizza joint serving up artisan pies and unique cinnamon rolls made with locally sourced ingredients. It offers build-your-own pizzas, take out services, and delivery through third-party vendors.

If you would like more information regarding the Atlanta expansion or artists involved, please call Clint Gray at (615) 500-1048 or email [email protected].