“Baby, why do you walk with your head down?”

Every morning, Chef Jason Williams saw the same woman, an employee of the Loews Vanderbilt Hotel in Nashville, where he worked as a breakfast line cook in the late 90s. She smoked on the same bench at the same time without fail. Their interactions didn’t extended beyond the occasional head nod, until one day when the woman yelled out to Williams.

Nearly two decades later, a brawny man with broad shoulders holds his head high from behind a pinewood desk. A laptop and flip calendar are its only residents, signs that this office is new. He is now the chef behind the Nashville-based artisanal pizza restaurant, Slim & Husky’s, which recently traded its North Nashville home for an office building just down the road.

Williams is used to wearing plastic gloves, handling a variety of ingredients, and composing meals on plates, so the desk is a change. But, this is the trajectory of a person with a do-it-yourself mindset.

It’s part of the journey of a guy who became a Bonanza Steakhouse chef at 16, who bought a car with $500 he won for a college scholarship essay, and who has cooked with some of Nashville’s greatest chefs and for some of the nation’s most famous celebrities.

There is no other way to describe him. Williams is Master P with a spatula.

Percy Miller, a.k.a. Master P, is known for bringing hustle ethic and a healthy criticism of larger-than-life record label deals to the hip-hop industry. As the founder of No Limits Records, Master P took $10,000 in settlement money and turned it into a business empire worth $250 million.

From quickly rising through the ranks of prestigious Nashville hotels to assisting the S&H founders in creating their entire menu from scratch, Williams has done plenty to “Make Em’ Say Uhh.”

“My family had a garden that was probably half an acre and I grew up working in gardens with fresh vegetables as organic as it can get, you know what I’m saying.”

He didn’t grow up on fine dining, so the learning curve was a challenge.

Like Master P, Williams dropped out of college and jumped straight into the restaurant space. The executive chef at the Renaissance Hotel at the time, Cass Mitchell, took Williams under his wing.

“Cass is a black chef, and in the 90s, people didn’t talk about it, but in kitchens you saw a lot of minorities,” Williams said. “But, the person in charge was not, usually because of education, an understanding of what it takes to be in charge, and opportunity.”

Starting then, Williams made a pact with himself. He wouldn’t goof off, and he would focus only on growing his culinary skills. The commitment paid off as he built his resume working with Tom Ford at the Regal Maxwell House Hotel in the Crown Court.

When that hotel began slimming its food and beverage departments, Williams made the move to the Loews Vanderbilt Hotel. He ended up managing all aspects of food including restaurant service, room service, bar, banquets, and catering through his roles as employee cafeteria manager and eventually, the executive sous chef.

Master P also lacked an extensive formal education in business management, yet he excelled. His independent albums “The Ghettos Tryin’ to Kill Me” and “99 Ways to Die” sold upwards of 250 million copies through word-of-mouth. His success is largely attributed to his ability to network with members of the hip hop community, but even more so, his passion for the product and the lack of his hardcore gangster rap sound in the genre.

Likewise, Williams had something the world wanted. He just hadn’t found the right venue to share it.

Although Williams became a fine dining connoisseur, he never abandoned his fresh roots and “simple is still good” philosophy. Not even in the face of international review. 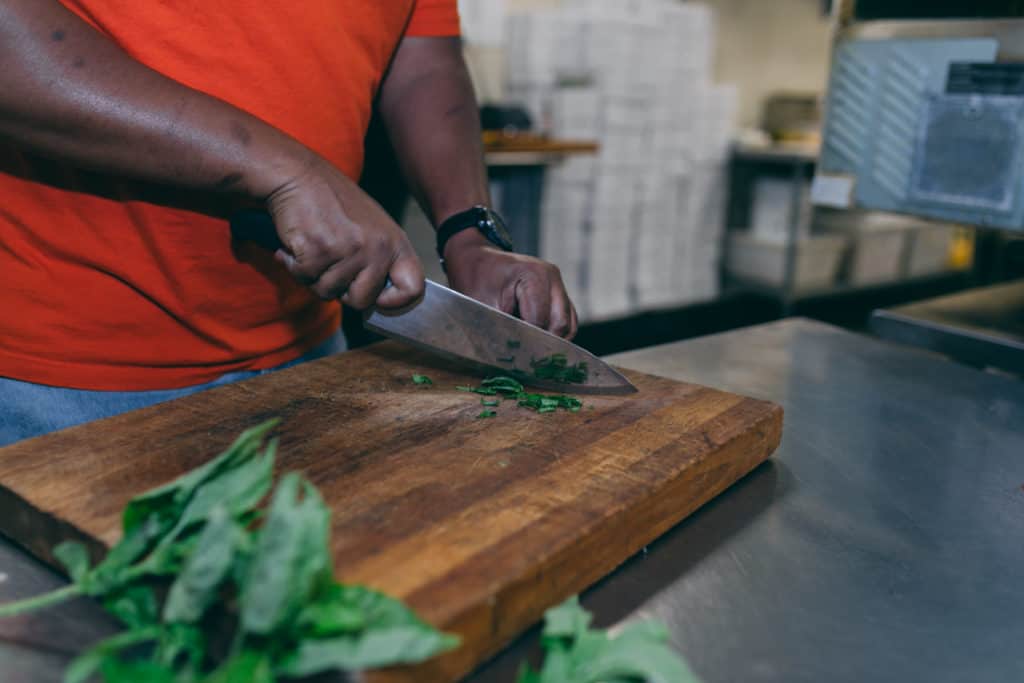 One night, the editor of Bon Appetit Magazine and food consultant for the Loews hotel chain, Clark Wolf, visited Williams’ restaurant five minutes before closing time. Williams will never forget the special on the menu.

It was nothing complex, lamb with a cranberry cornbread dressing. Not exactly the type of meal most chefs would be confident presenting to such an influential food critic. His staff cooked up the slice of lamb and drizzled the crimson sauce over it.

Fifteen minutes later, Wolf asked to see the chef, an unusual request. Williams sauntered out to the restaurant’s main dining area. Wolf paused for a moment. The tension was as palpable as the fork resting between Wolf’s fingers.

The comment caused Williams to reconsider his philosophy as a chef.

“I got to a place where I understood that the pretentiousness of fine dining doesn’t always equate to being a quality chef,” he said. “Smiling faces and happy bellies do.”

Soon after, he became the chef for Park Manor, a retirement community in Belle Meade. There, he took a standard nursing home menu with traditional Southern fare and established an a la carte system with items made from simple and real ingredients.

Defying Odds in the Pizza Industry

Since Williams joined the Slim & Husky’s team four years ago, he has transformed a dream into reality. With conceptual guidance from co-owners, Clint Gray, E.J. Reed, and Derrick Moore, Williams developed hip hop and R&B-inspired pies and cinnamon rolls.

The five-star chef took a stab at fast-casual pizza and made it revolutionary.

His Smokin’ Herb pie mixes the creamy texture of the S&H House Cheese Blend with tangy onions and an unlikely pairing of salmon. The Nothin’ But a “V” Thang signature artisan pizza features a bean ragu sauce that would make a diehard carnivore forget about meat.

For Williams and the founders of Slim & Husky’s, pizza is more than food. It’s a form of self-expression and freedom.

Cheese blends that pizza lovers won’t find in any other joint. Custom dough that S&H cooks prepare fresh daily. Housemade sauces crafted through the years Williams spent catering high-end events. All of this is wrapped up in a build-your-own model that allows people to make their food theirs.

“I started cooking because I like to make people happy with food,” Williams said. “Then I went back to it because I needed to make money, and I fell in love with it because the people who were there and who taught me, encouraged me, and gave me opportunities that I earned.”

Williams gets up from his chair and fist pumps the desk like it’s an old friend. He is onto the next kitchen, the next event, and the next community. His food is going to make someone smile today.